Thanks to Venice - the regional capital - it is first in Italy and among the very first in Europe in terms of the number of visitors: the reasons for visiting the Veneto region are not limited only to its extraordinary city on the water. Veneto is home to cities of art and small historic villages, mountains, and natural oases. Among the most famous destinations that are worth the trip, we suggest these ten: 1. Venice: together with its lagoon, a UNESCO World Heritage Site, it is an incredible city for its immense artistic and historical treasure 2. The Palladian villas: built around the middle of the 16th century, scattered between the provinces of Vicenza, Padua, Treviso, and Rovigo. 3. The Belluno Dolomites: among the most beautiful mountains in the world, they include some of the significant Dolomite groups, such as the Tre Cime di Lavaredo, the Marmolada, the Civetta 4. The Prosecco Hills: the prized white wine known throughout the world, is produced in the hills embroidered with vineyards between Conegliano and Valdobbiadene. 5. Verona: the city of love and work, an elegant city full of attractions 6. Po Delta: it is a vast protected area of ​​wetlands between the Po di Goro and the Adige River inhabited by over 300 bird species. 7. Lake Garda: famous for the picturesque villages and spas, trekking opportunities, and amusement parks. 8. Cittadella: a fascinating walled city of medieval origins a few kilometres from Padua 9. Padua: a refined town worth a visit only to admire Giotto's masterpieces in the Cappella Scrovegni. 10. Bassano del Grappa: this town sits at the foot of Monte Grappa and is famous for its covered wooden bridge built by Palladio and is a historical centre. Venice and its symbolic places are known worldwide: Piazza San Marco with its Campanile, the Basilica of San Marco and the Doge's Palace, the Rialto Bridge. Its palaces and churches, its canals, its streets ( the "calli"), Carnival and the Historical Regatta, the Murano glass, and the Burano lace. Venice is not the only one in Veneto to boast the title of Unesco World Heritage Site: among the protected Venetian palaces, there is also the city of Verona, with the Arena, its charming historic centre, and Juliet's House, linked to the events of Shakespeare's Romeo and Juliet; Vicenza and the villas of Andrea Palladio, the Botanical Garden of Padua, the oldest university garden in the world (dating back to 1545), the mountain range of the Dolomites, where the largest ski area in the world is and, last in order of time, the wine-growing region of ​​the Prosecco Hills.

From cultural visits to sporting activities, from trekking in the mountains to natural oases, passing through relaxing spas, amusement parks, and villages rich in history, the activities to be done are indeed varied and exciting throughout the Veneto region, to meet the needs of every type of traveller.

There are many trekking routes in the mountains and hills of the region: the Alte Vie delle Dolomiti crosses the National Park of the Belluno Dolomites and thematic paths and trails covered on horseback or by mountain bike.

A great classic for mountain lovers is the Route of the 52 tunnels of Mount Pasubio, in the Vicentine Pre-Alps. This incredible work of military engineering carried out by the Italian army during the First World War has great historical value. The Path delle Vedette, which winds through the Prosecco Hills, among tunnels and trenches, dates back to the Great War.

In the province of Padua, on the Euganean Hills, exist thirty trekking routes: the Alta Via dei Colli Euganei, the Atestino Path, and the Naturalistic Path of the Central Euganean Hills are among the most beautiful. But also paths for mountain bike lovers ( including a 63 km ring), climbing gyms, and the Y-40 – “The Deep Joy,” the deepest diving pool in the world. In the Lessinia Park, between Verona and Monte Baldo, several trekking itineraries and museums are dedicated to fossils in an area with remarkable geological and naturalistic features.

As for winter sports, Veneto boasts a total of 549 km of slopes where skiers and snowboarders can indulge themselves in the presence of spectacular scenery, among some of the most beautiful mountains.

Cortina D’Ampezzo, so-called “Queen of the Dolomites,” is a historic holiday resort and destination for the international jet-set; there are 120 kilometres of slopes and a snow park, 60 km for cross-country skiing and toboggan runs.

In the Arabba / Marmolada area, you can ski along 63 km of very scenic slopes, just a step away from the Sellaronda ski tour (40 km between Arabba, Val Gardena, Alta Badia, and Val di Fassa).  At the foot of his majesty, the Marmolada, the highest peak of the Dolomites, devote yourself to cross-country skiing or have fun in the snow park with activities also designed for families. In the Civetta ski area, between Alleghe, Selva di Cadore and the Val di Zoldo, you can find 80 km of slopes and two snow parks with the possibility of skiing,  also during the night.

Veneto is one of the Italian regions with the highest number of cycle paths: among the most exciting itineraries is GiraSile, the Greenway del Sile, a network of 125 kilometres of cycle paths (but also accessible by boat) that crosses the Park Regional Nature of the River Sile, in the Treviso area. In Treviso’s province, you can cycle along the Treviso – Ostiglia cycle path built parallel to the old railway: 118 km long. It crosses the whole region up to the border with the province Mantua.

There are numerous itineraries to be undertaken by mountain bike on the Asiago plateau, from the most straightforward and suitable families to the most demanding routes, such as the Giro delle Malghe, the Strada del Vecchio Trenino, and the itineraries on Mount Ortigara, a symbol of the Great War. On the other hand, those who want something more than a simple bike ride can dedicate themselves to cycle tourism along the cycle path from Venice to Munich (560 kilometres long), which crosses Italy, Austria, and Germany. Inside the Po Delta, between Veneto and Emilia Romagna, you can cycle through various nature trails and do real bike safaris (the Po Delta is a perfect oasis for birdwatching). Here it is also possible to indulge in nature photography, excursions by boat, canoe, or horseback.

Along the 160 kilometres of the Veneto coast, there are many sea activities available: between Bibione and Cavallino, it is possible to practice beach volleyball, boating, surfing, water skiing, or cycling; water sports such as sailing, boating, or diving are also possible on Lake Garda. Golf lovers will find many 18 and 27 hole courses throughout the region, from the countryside to the hilly areas, from the sea to the mountains: among the most exciting golf courses, the Golf Club of Verona, or the Golf Club Villafranca, in Custoza, the Padua Golf Club, the Asiago Golf Club, or the Venice Golf Club.

In terms of relaxation and well-being, Abano Terme and Montegrotto, in the Euganean Hills, offer numerous thermal treatments and mud therapy centres.  Bibione, a famous seaside resort, has large thermal pools and spas to practice mud-balneotherapy. The Garda Thermal Park of Villa dei Cedri, in Colà di Lazise, ​​a few steps from Lake Garda, is famous for its thermal lakes immersed in a park of secular trees.

A unique experience is to attend a concert or opera performance at the Verona Arena, perhaps in conjunction with the Arena Opera Festival, the famous opera festival held during the summer season.

Wine connoisseurs can instead set out to discover the many Wine Roads (sixteen throughout the region), from Valpolicella to the Euganean Hills, from Prosecco to Piave or Bardolino.

To the delight of the little ones, unmissable stops are the large amusement parks on Lake Garda such as Gardaland, the Sealife Aquarium, the Movieland film studios, the CanevaWorld water park, the Medieval Times of Lazise, ​​the Natura Viva Naturalistic Park, and the Garden Park.

The events not to miss in the region are the Feast of the Redeemer held in Venice on the third Sunday of July each year. At the same time, the first Sunday of September is the turn of the Historical Regatta. Between the end of August and the beginning of September, the International Film Festival takes place. The Game of Chess in Marostica takes place on the second weekend of September of even years. Vinitaly, the international wine fair, takes place every year in Verona in April.

It is a cuisine with ancient roots. Venice – the gateway to the East for Europe – was the first to welcome flavours and ingredients from all over the world, such as corn, sugar, cod, and rice. Four essential ingredients of Venetian cuisine: rice, polenta, beans, and cod, prepared in an innumerable number of variations within the various areas of the region and combined with a large number of vegetables, such as Radicchio Rosso di Treviso, Radicchio Variegato di Castelfranco, white asparagus or onions.

A good meal can start with Venetian-style liver pate, veal liver, and onion, a platter of typical cold cuts, for example with Soppressata or horse salami or cheeses (such as Asiago, Montasio or Provolone Valpadana), sardines in saor, seasoned with sweet and sour onions, a must in the “Cicchetti,” the typical Venetian appetizers to be consumed in the “Bacari,” the traditional taverns.

In selecting the first courses, it is impossible not to mention “Pasta e Fasoi alla Veneta,” a tasty bean soup of traditional peasant cuisine. Risi e Bisi, a rice-based on peas halfway between a risotto and a soup, or bigoli, a type of long pasta spread throughout the Veneto region, tasted in many variations, perhaps with duck sauce (the Bigoli co l’Ana) or with onion and sardines (the Bigoli co le Sardele).

Among the latter to steal the show is the cod, cod preserved in salt, to be enjoyed, for example, cooked in the Vicentine style. With tomato, capers, and onion, or creamed, reduced to a delicate cream prepared with oil, garlic, and parsley.

Among the most famous second courses, there is the Venetian liver, veal liver cooked with onions. Venetian snails, sea snails cooked with garlic and parsley or Musso stew, donkey meat stewed with red wine and vegetables, be served with polenta, be it yellow or white.

Among the desserts, it is worth recommending the Tiramisu, widespread throughout Italy but originating – apparently – from the Vicenza area, the Pinza, a dessert prepared with dried fruit and a glass of grappa, the Fregolotta, a dry pastry cake with almonds and aromas, and, at Christmas, Pandoro, the Christmas cake from the city of Verona.

Those who love street food can indulge themselves with Cicchetti based on a meatball. Crostini with cod, sardines in saor, cold cuts, and cheeses accompanied by a glass of wine or a Spritz.  A bag of fried fish, polenta and sausage or a sandwich col Fromai (cheese) and Pastin, coarse-grained minced meat. 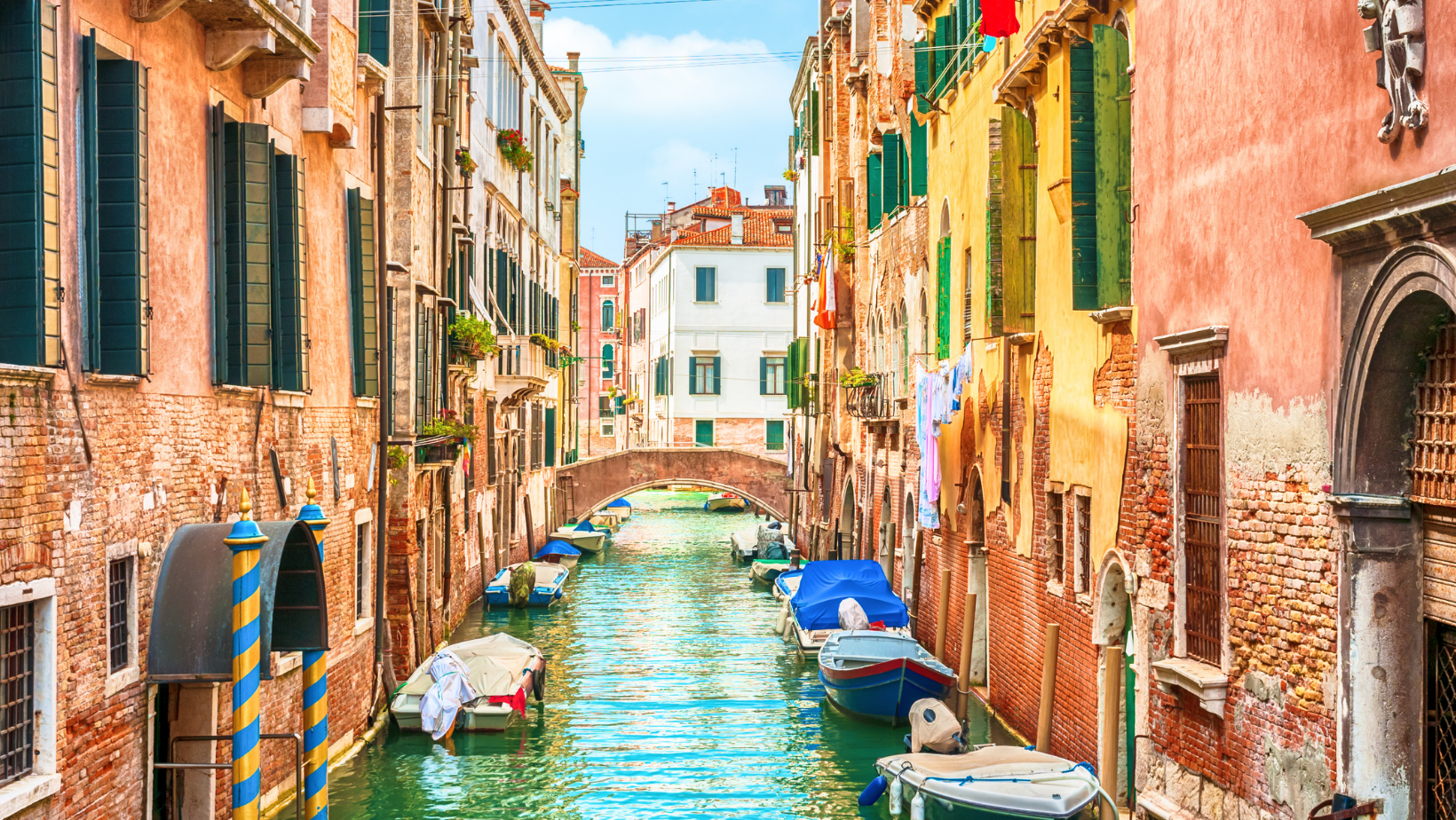