Sicily is the largest island in Italy and in the Mediterranean, a surprising land rich in history and traditions, where art and culture interlace with extraordinary natural beauty. There are so many reasons to visit Sicily, from the sea to the mountains passing through the countryside, volcanoes, and seaside villages. As Frederick of Swabia, King of Sicily, exclaimed, "I do not envy God Heaven, because I am happy to live in Sicily". What are the things to see during a trip to Sicily? The places to mention would be many, but the top ten of the most emblematic places in the region cannot fail to include: 1. Taormina: a refuge for artists, in a panoramic position between the sea and the mountains, it is a refined town which holds splendid treasures, such as its incredible Greek Theater 2. Ragusa Ibla: it is the oldest district of the city of Ragusa, which rises from the top of the hill between the Iblei mountains, and which boasts more than fifty churches and noble palaces 3. Scala dei Turchi: with its white cliff that rises above a very blue sea, it is one of the most beautiful beaches of Sicily 4. Aeolian Islands: seven islands, each one different from the other, with dream beaches and coves and two active volcanoes where you can go walking and trekking. 5. Syracuse and the island of Ortigia: a great city of art with one of the largest archaeological areas of the Mediterranean. 6. Palermo: from the Norman to the Arab style, from the Greek to the Spanish testimonies, the regional capital is a melting pot of cultures and a place of lively local markets 7. Agrigento and the Valley of the Temples: is one of the most popular destinations with its preserved archaeological park, the largest in the world 8. Noto: it is the undisputed capital of Sicilian Baroque, with an artistic heritage of exceptional churches and palaces 9. Lampedusa: boasts a splendid sea and beautiful beaches, such as Isola dei Conigli, ranked among the most beautiful in the world 10. San Vito Lo Capo and the Zingaro Reserve: the western end of the island contains sensational beaches, unique archaeological sites, and spectacular nature, such as the Zingaro Reserve Seven Sicilian sites appear in the list of UNESCO World Heritage Sites: in addition to the baroque cities of Noto, Modica, and Ragusa, the Aeolian Islands, the Valley of the Temples in Agrigento and Syracuse with the rock necropolis of Pantalica, they have obtained this prestigious recognition also of Etna - as one of the most emblematic and active volcanoes in the world -, the Villa Romana del Casale, in Piazza Armerina, and the Arab-Norman Route of Palermo, Monreale, and Cefalù, an itinerary of discovery in Arab history- Norman with excellent artistic contents.

In Sicily, it is possible to engage in various activities: from sea life to mountain excursions, from participation in local folklore events to more adventurous sports activities. Entertainment opportunities are numerous in every corner of the region and at any time of the year.

The sea and the beaches of Sicily are among the most beautiful in the entire Mediterranean basin: it is impossible to resist the temptation to enjoy a bit of sea life along its beautiful coasts and on its many islands. Among the most beautiful beaches, the one of San Vito lo Capo, the small beach between the tuff caves of Cala Rossa, on the island of Favignana, the Isola dei Conigli in Lampedusa – always present in the rankings of the most beautiful beaches in the world -, the white cliff of Scala dei Turchi, in Realmonte, the coast of Cala Capreria, within the Zingaro Reserve, Isola Bella in Taormina, the beach of Calamosche between Vendicari and Noto, the beach of Mondello, near Palermo, and the fascinating Isola delle Correnti in Portopalo, the extreme south-eastern tip of Sicily, where the Ionian Sea joins the Mediterranean Sea. Boat trips between the Aeolian or Egadi volcanic archipelago islands, or along the coasts of Pantelleria or Lampedusa, are highly recommended.

Trekking lovers in Sicily will not be disappointed: it is possible to go hiking along scenic trails or on the slopes of still active volcanoes in the region. On the Aeolian Islands, there are the volcanoes of Stromboli and Vulcano. Moving away a few kilometres from Catania, climb to Etna’s top, with its 3,350 m, it is the largest volcano in Europe.

Reach the summit on foot along paths of varying length and difficulty and sleep at high altitude in various hiking refuges. Alternatively, take part in a jeep tour or take the cable car that leads up to 2,500 meters or continue with off-road vehicles up to 2,900 meters.

Make an excursion on foot or horseback: for example, between the Peloritani Mountains and the Nebrodi Mountains, in north-eastern Sicily, or within the Madonie Park, a protected natural area not far from Palermo, as well as in the Alcamo Nature Reserve. or in the Necropolis of Pantalica, the largest European Necropolis, between streams and calcareous canyons. In the Alcantara Gorges, between a and Catania, it is also possible to practice canyoning, hydrospeed, or body rafting. Those who love walking can try their hand at the “Iblean Way,” a fascinating nature trail that winds for 150 kilometres in the Sicilian hinterland, in the Iblei Mountains, between the provinces of Ragusa, Syracuse, and Catania. Or even go to discovering the archaeological and naturalistic area of ​​Cava d’Ispica, a canyon carved out by nature in the Iblei highlands. Those looking for something different can go trekking with donkeys inside the Floristella Mining Park, an important example of industrial archaeology around Piazza Armerina, or visit Trapani’s salt pans Paceco, today a protected natural area of ​​the WWF, or the Vendicari Nature Reserve. This wildlife oasis stretches along eight kilometres of pristine beaches.

Travel by car or with a bicycle. You can follow an itinerary of culture and taste along with one of the thirteen Wine and Flavor Roads of Sicily, among which the Val di Noto Wine Road, the Erice DOC Wine Road, the Wine and Flavors Road of Val di Mazara or the Terre Sicane Wine Route. Along the way, it is possible to visit family-run wineries and taste local products in a combination of history, nature, and flavours.

Thanks to the mild climate and the soil’s particular composition, Sicily also boasts an ancient spa tradition. Segesta is home to the Segesta waters. These waters are alkaline, highly mineralized, and sulfurous, excellent for thermal baths, mud baths, and anthro-therapy.  Also, go to the natural spas on Vulcano’s island and Lake Specchio di Venere’s on Pantelleria’s island.

For those travelling with children, an opportunity not to be missed in Sicily is to attend a puppet show, the typical Sicilian marionettes: concerts are held at the Teatro dei Pupi in Syracuse, at the Charlemagne Theater, and the Opera House of the Puppets of Palermo. Furthermore, near Catania, there is Etnaland, the largest amusement park in southern Italy, the City of Science in Catania, and three water parks: Etnaland in Belpasso (Catania), Scivolandia in Cammarata (Agrigento), and Acquapark Conte in Sommatino (Caltanissetta ).

Among the important recurring events in Sicily, we find the Carnival of Acireale, one of the most famous in Italy, with the parade of allegorical floats and floral floats, the Corpus Domini Infiorata in the streets of Noto in May.

The dishes of Sicilian cuisine are known and loved worldwide: a journey to discover his land is also and above all, a trip through its culinary specialities, which are a real riot of colours and flavours.

A typical Sicilian meal starts at its best with a wide variety of appetizers: from the simple combination of olives, cheeses, and salami to the classic caponata (fried vegetables dressed in tomato and sweet and sour sauce), to eggplant rolls or eggplant parmigiana, fried eggplant and au gratin in the oven with tomato, basil, garlic, and one or more cheeses.

When it comes to Sicilian first courses, the choice is extensive, with many specialities depending on the area. The most typical are: Pasta alla Norma, originally from Catania, macaroni with tomato sauce, fried eggplant, and salted ricotta. The pasta with sardines, based on Bucatini, fresh sardines, and fennel.  Busiate, a traditional Trapanese pasta, enjoyed the local Trapanese pesto prepared with tomato, basil, garlic, almonds, and pecorino.

Among the best Sicilian second courses, it is fish that is king: it is mandatory to try at least once the Sarde a Beccafico, a tasty fish roll with pecorino and raisins, anchovy meatballs, or Sicilian swordfish, with cherry tomatoes and capers; those who prefer meat should try the Falsomagro or “Bruciuluni,” a large roll filled with cheese and vegetables.

Does anyone offer you a dessert? In Sicily, it is better not to decline the invitation because the desserts are real delicacies. The most famous is Cannoli, fried and filled with fresh sheep’s milk ricotta, chocolate drops, and orange peel or chopped pistachios. The Sicilian Cassata, prepared with ricotta, chocolate drops, candied fruit, and marzipan laid on sponge cake and almond paste sweets, always present in every Sicilian pastry.

If, on the other hand, you want to take advantage of a quick meal, there is no shortage of street food offers: inevitable are the arancini, breaded and fried rice balls stuffed with tomato, ragù, or fish; in Palermo, bread and Panelle, chickpea flour fritters, crocchè, croquettes made only with potatoes and eggs, then breaded and fried, and Sfincione, similar to a pizza but seasoned with tomato, onion, anchovies, and oregano are inevitable, and pane Cunzato, a bread seasoned with oil, fresh tomatoes, oregano, anchovies, salt, and pepper but also cheese and onions. Perfect at any time of the day – even if in Sicily it is typical for breakfast – is the Granita with Brioche, to be enjoyed in many delicious variations of which we recommend the one with almond or mulberry.

Among the wines, the most famous labels are those of Nero D’Avola, the most typically Sicilian red grape variety, native to the south-east of the island, Etna wines, such as Etna Rosso, Faro and ‘Etna Bianco, Alcamo from the Trapani and Palermo area, Moscato di Noto, Malvasia delle Lipari, and among the liqueur wines Marsala and Zibibbo from Pantelleria. 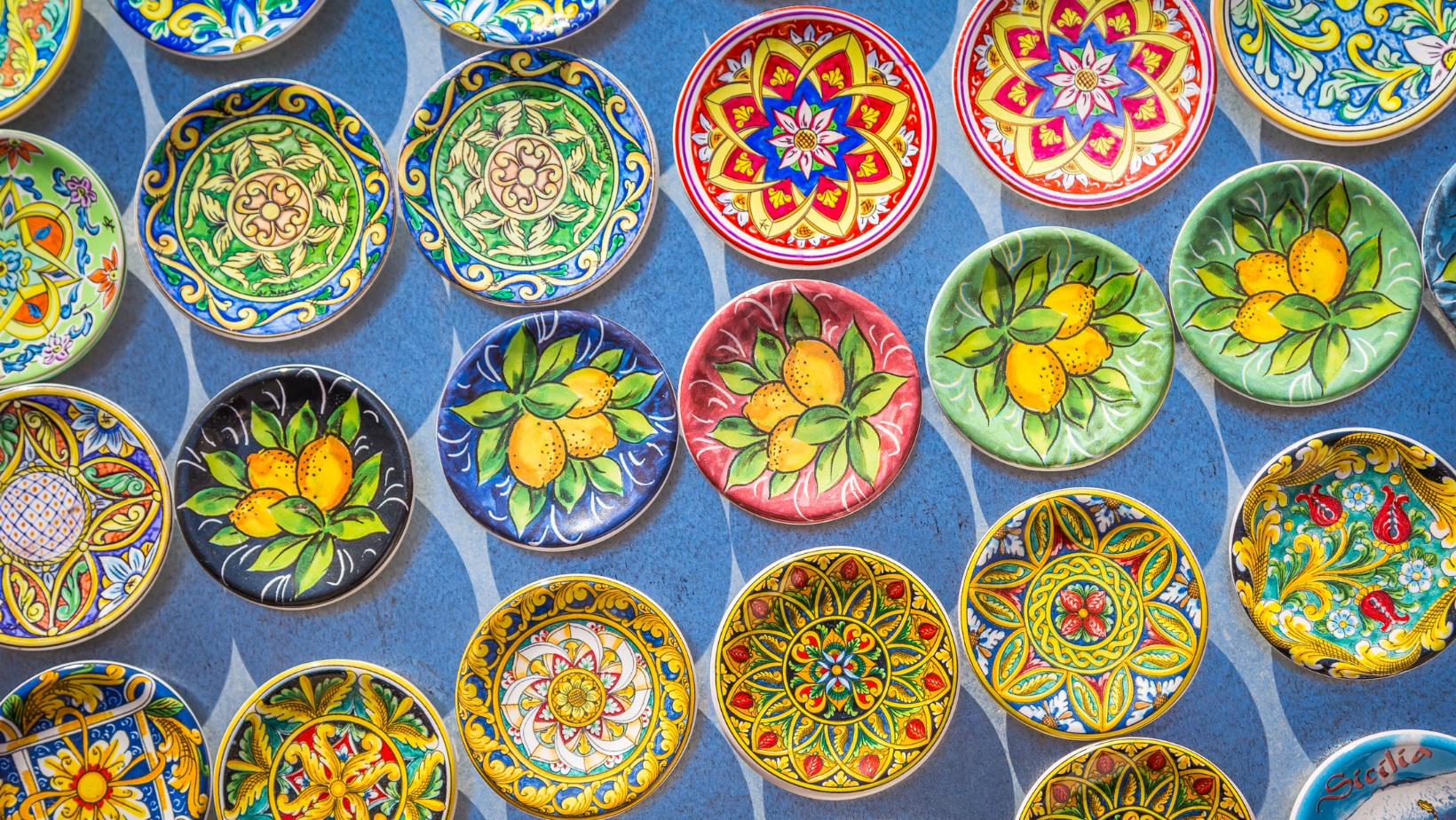