The region recalls its great past in the cities of art, in the squares that look like living rooms, in the medieval villages where time seems to have stood still, in the streets and the noble palaces. Ascoli Piceno represents Italy's monumental cities with its medieval historical centre and the Piazza del Popolo, with a vaulted loggia. Most of it with the battlements of the Palazzo dei Capitani del Popolo. In the city, it is possible to visit some craft workshops that express Ascoli's creativity and skill, such as that of the guitar maker. On the first Sunday in August, the city's streets frame the historic "Quintana", where experienced knights compete against each other in the Saracen tournament. Ancona is an old port junction known as the "Gateway to the East". It preserves prestigious monuments and an inviting beach. The Cathedral of San Ciriaco is located on an ancient Greek acropolis site and is considered one of the most impressive medieval churches in Marche. Urbino's historic centre with the Palazzo Ducale is a UNESCO World Heritage Site and is an impressive architectural and artistic example of the Italian Renaissance. Gradara is also worth a visit with its fortress, a great example of medieval military architecture and a place where, according to tradition, Paolo and Francesca kissed, as Dante told in the fifth song of Hell. The Mariano di Loreto sanctuary is an essential stage for religious tourism as it is considered one of the most important pilgrimage sites in the Catholic world. For lovers of classical music, during two weeks in August, full immersion in the sheet music of Gioacchino Rossini, a native of Pesaro. The Rossini Opera Festival has become an indispensable event for music lovers worldwide in the impressive surroundings of the city, which offers not only cultural attractions. For those with a sweet tooth, there is nothing better than going to Fano during Carnival. The Fano Carnival is of ancient origin and has at least three original elements: the start of sweets in the crowd from allegorical floats, the characteristic "volcanic" mask caricature of the most famous people of the city, and the Arabic music, a music band whose instruments are tin cans, Coffee pots, jugs.

The sea and mountains in this region are an ideal combination for those who like to hike and immerse themselves in the surrounding sea’s clear waters and the vegetation of its parks.

Precisely the latter occupies an excellent percentage of the area considered as a protected area.

The Marche with the National Park of the Sibillini Mountains and the Gran Sasso and Monti della Laga Park offers impressive scenarios with flora and fauna of considerable interest. Greenlight for bird watching with sightings of golden eagles, peregrine falcons, eagle owls, trekking enthusiasts, long walks in the woods, horse riding, canoeing, and mountain biking.

In particular, the bicycle offers the possibility of pleasant routes to discover naturalistic, historical, and artistic beauties and food and wine specialities typical of the region.

For skiing, snowboarding, and cross-country skiing lovers, the Apennines offer more than nine ski areas, snow parks, and cross-country trails of various lengths and degrees of difficulty. The Ussita Ice Palace, on the other hand, offers an enjoyable experience for those who skate on ice.

A trip to the Conero, the magnificent promontory of the same name’s regional park, which extends south of the capital, should not be missed. The Conero with Portonovo, Sirolo, and Numana is the Ancona Riviera. Its high and indented coastline and beautiful sea make it one of the fascinating holiday destinations on the Italian coast. The seabed of rare beauty, rich in animal and plant species, is a destination for diving of rare charm.

For music lovers, AnconaJazz brings international stars to the city and is the main event in the Marche region dedicated to jazz.

We are not talking about a single cuisine, but rather a union of aromas and flavours of the entire area with its specific characteristics. The hinterland’s typical roughness can be tasted in meat dishes with pork in porchetta, marinated lamb, or other dishes based on truffles such as Acqualagna and Sant’Agata Feltria or those mushroom-based. The first courses tagliatelle, strozzapreti, and the traditional “Vincisgrassi,” the forerunner of all baked lasagna on the peninsula.

The sea’s fresh and sweet taste perceives in fish dishes; The undisputed master of the seaside table is the “Brodetto,” which collects more than 14 fish specialities enriched with tomatoes in the Pesaro and Ancona areas and with saffron in Ascoli. The symbolic dish of the town of Ascoli is the mixed fried all’ Ascolana: stuffed olives, cream, zucchini, artichokes, and lamb chops, while among the desserts, we find the Ciambellotto with aniseed mushrooms, cicerchiata, fried and stuffed ravioli of chestnuts, cream, and ricotta.

The Pecorino di Talamello, wrapped in walnut leaves and matured in tuff caves, the ham, the Lonzini, and the Coppa di Testa are noteworthy.

Piceni wines should accompany everything: the white Falerio dei Colli Ascolani, the Rosso Piceno, and the Rosso Piceno Superiore and round off the cooked wine, stored in barrels, with the Mediterranean touch of anisette and mistrà. 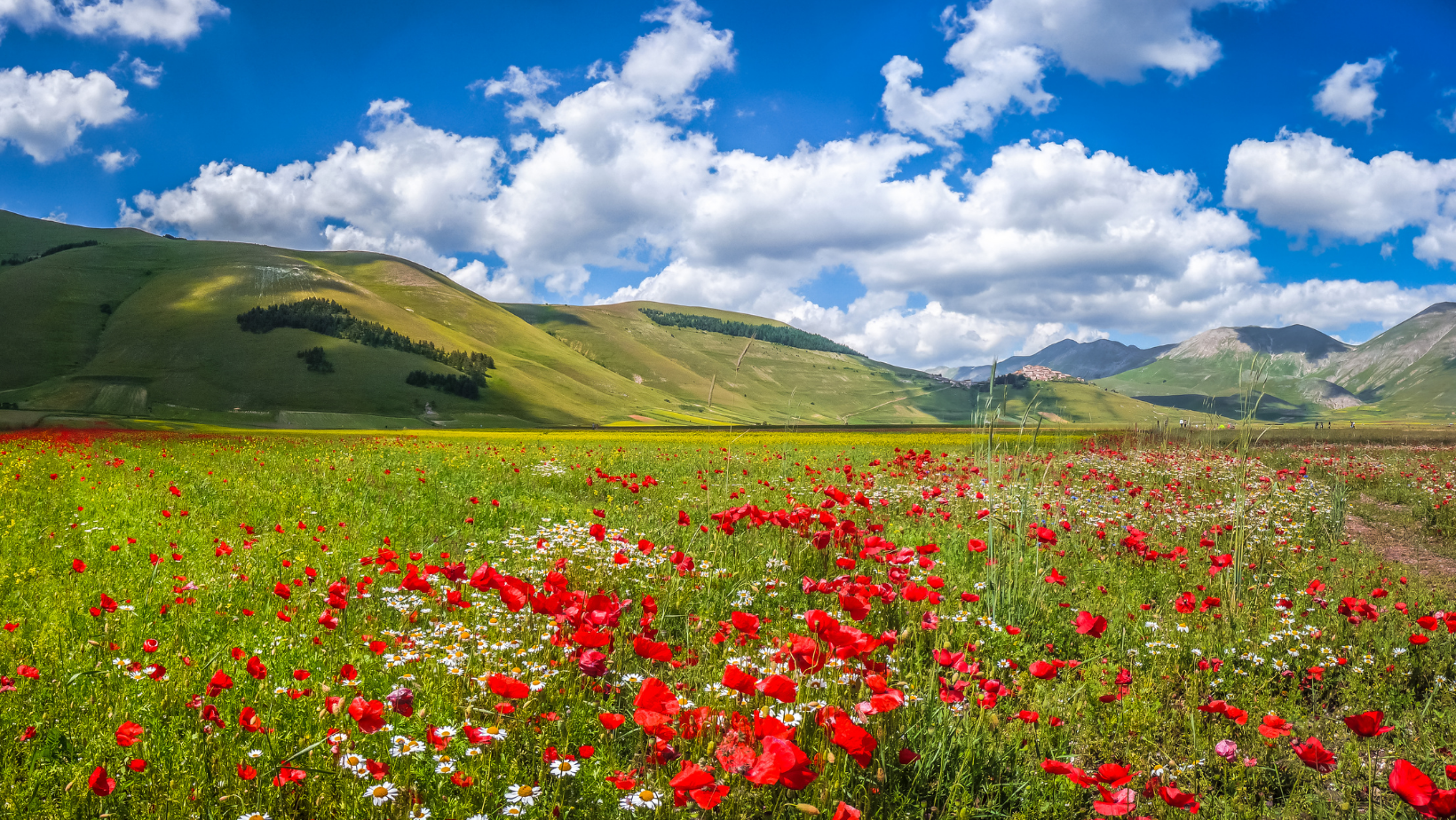