Cities and villages, nature reserves and hidden treasures, archaeological sites, lakes, and beaches: Lazio is where Rome is, but there is so much more to it. The region is vast and rich in treasures: on its territory, there are mountains and sea, rivers, lakes, and volcanoes.

Another exciting aspect is the many archaeological sites, such as the Etruscan finds and the tombs of Tuscia in the Viterbo region, Ostia Antica, the Temple of Jupiter Anxur in Terracina, and the cemetery of Cerveteri.

The region is full of archaeological sites and locations of high cultural interest: Rome and the Vatican, the Villa Adriana sites in Tivoli, where the emperor of the same name lived, and the Villa D’Este, a masterpiece of the Renaissance. The Etruscan necropolis of Cerveteri and in Tarquinia in the Viterbo Area, in the Monte Cimino area and in the Bracciano-Martignano Regional Natural Park, a nature reserve between Lake Bracciano and Lake Martignano.

1. Rome: With a history of 28 centuries, treasures and sights unique in the world, and a charm that cannot be resisted, Rome is a constant surprise, a milestone on any "great tour" of Italy 2. Ostia Antica: In its beautiful archaeological park, remains from the 7th century BC are preserved. and it is an inevitable stop to relive the time of ancient Rome 3. Pontine Islands: In front of the Gulf of Gaeta in southern Lazio is an archipelago of six magnificent islands of volcanic origin that differ from each other (including Ponza, Palmarola, Zannone, Gavi, Ventotene, Santo Stefano). 4. The Castelli Romani: a hilly area in the Albanians, just outside Rome, famous for its picturesque villages (including Castel Gandolfo, the summer residence of the Popes), stately villas, and excellent cuisine 5. Civita di Bagnoregio: called "the dying city," is a historic village on a hill and can only be reached via a footbridge near Lake Bolsena 6. Tarquinia: a city of art and a symbol of the Etruscan civilization. The city is home to an exceptional necropolis, medieval monuments, and a nature reserve along the coast 7. The Parco dei Mostri di Bomarzo: a unique natural park of its kind with basalt sculptures from the 16th century depicting monsters, gods, and mythological beings 8. Tivoli: a city 30 km from Rome, a place with sanctuaries and magnificent villas such as Hadrian's Villa, Villa Gregoriana Park, Villa D'Este, and the Sanctuary of Ercole Vincitore 9. The Circeo National Park: a large protected area along the coast between Anzio and Terracina, a UNESCO biosphere reserve, which also includes Mount Circeo and the uninhabited island of Zannone 10. Sperlonga: It sits on a rocky outcrop overlooking the sea, between narrow streets and whitewashed houses.

The site of Lucus Feroniae in the municipality of Capena on the ancient Via Tiberina. Then the Etruscan excavations of Vulci and the Etruscan necropolis of Tuscania and Cerveteri.

Lazio offers much more besides history and archaeology. The coastline overlooking the Tyrrhenian Sea provides 360 km of mainly sandy coastline, dunes, watchtowers, and impressive beaches. Among the most beautiful beaches is the very long beach of Sabaudia between sand dunes and Mediterranean scrub, the beach Litorale del Circeo in the same name with its clear and clean sea, the beaches Levante and Ponente in Terracina. Cala Nave di Ventotene beach, Tor Caldara beach, in Anzio, enclosed in a nature reserve, the Gaeta coast, 10 kilometres from Montagna Spaccata in Sperlonga with the beaches of Arenauta, Ariana, Sant’Agostino, and Serapo. The Grotta di Tiberio, a natural cave that is very popular with snorkelers, is imposing.

For relaxation and well-being, you can visit one of the most famous spas in Fiuggi, which has therapeutic properties known as early as 1200. The sulfurous Terme di Tivoli, known since the time of imperial Rome, is now recovered and known as “Terme di Roma” and the Terme dei Papi di Viterbo with their famous hyperthermic waters.

Those travelling as a family will delight children by taking them to the Sacro Bosco (or Parco del Mostri) in Bomarzo in the Viterbo area, a natural park with curious basalt sculptures depicting monsters, deities, and legendary beings, or to the Bioparco di Roma, the garden of Italy’s oldest zoological park, Cinecittà World in Rome, a theme park linked to cinema and television, MagicLand, the amusement park of Rome Valmontone or one of the numerous water parks in the region.

Another important date is the one with the Infiorata of Genzano in the province of Rome with its magnificent flower carpets on the occasion of the feast of Corpus Domini. In the Viterbo area, the Palio dei Borgia in Nepi is a re-enactment of the Franciscan crib in Greccio (during Christmas time) and the Representation of the ascent to the Calvary, which takes place at Easter in Bagnoregio. 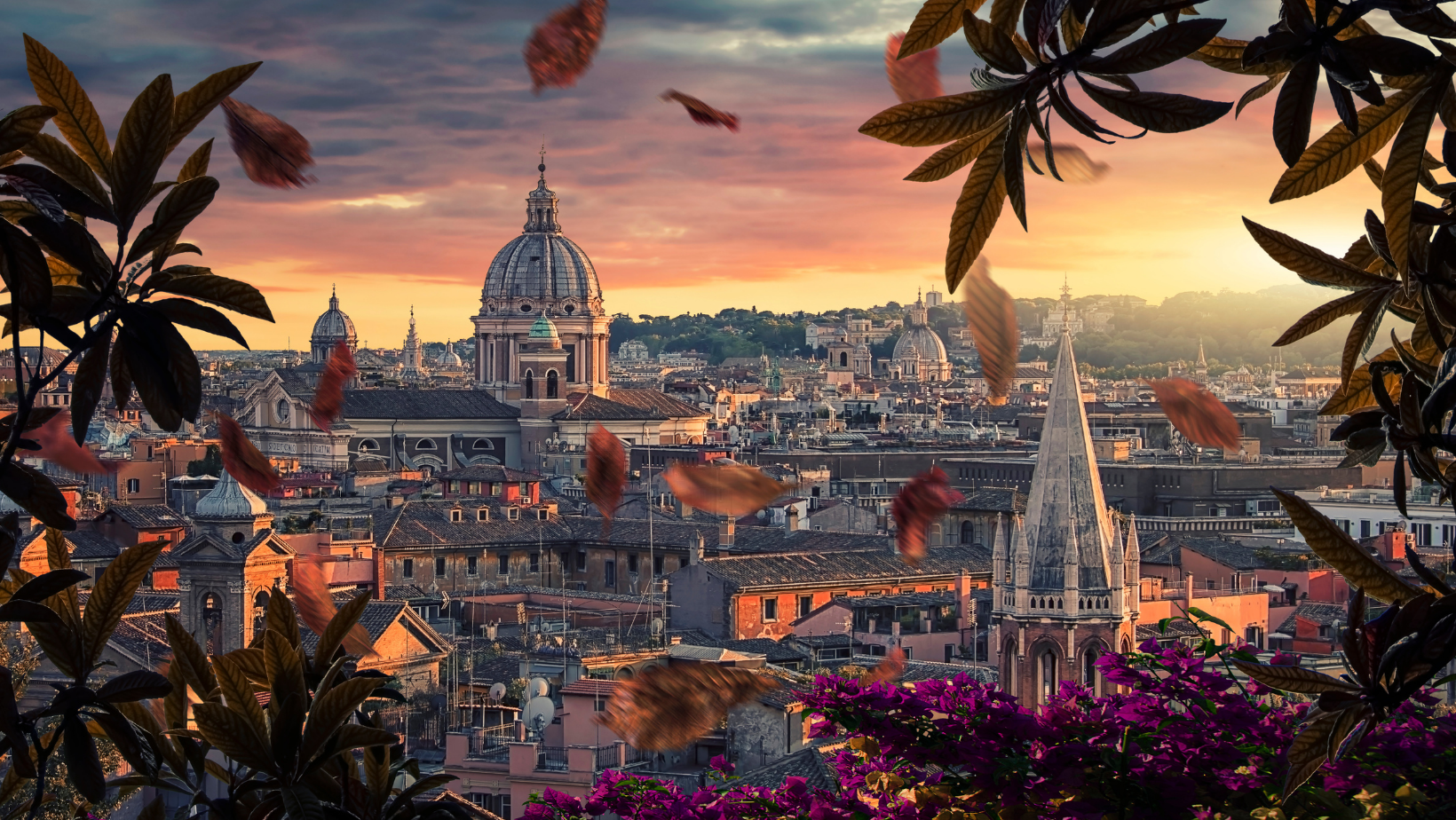